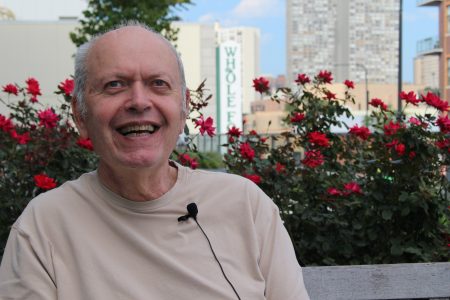 Thomas Gertz was born and raised in Chicago, and he has been a Town Hall resident since it opened. A professor of sexology, Thomas has been teaching about human sexual behavior and fighting to normalize LGBTQ lifestyles since the 1970’s.

On the Mattachine Society

Thomas has been very open with who he was from a very early age. His fearless, honest nature made him a perfect fit as an advocate for the LGBTQ scene. In the 1970’s, he was a leader in one of the oldest LGBTQ formal scenes in Chicago – the Mattachine Society.

“I remember picking up a Mattachine Society magazine at a young age, and got involved with the Chicago branch very quickly. Mattachine means a role played behind a mask, and back then we were all hiding behind masks – but that doesn’t mean I wasn’t open about who I was. We were on radio and tv, and we held educational services for social workers and hospitals. We had to educate the people about who we were as we fought against stigma.”

“And it was a real fight. In those early days, we had to fight to just find a place to meet, to be around other gay people. We were thankful for places like the ACLU – and even for our Alderman Tom Tunney, because we were welcome at his restaurants. Being welcome is an incredibly important feeling, and it’s hard to know that until you don’t have it.”

“We also had a running phone hotline where volunteers would connect people with services – lawyers or other referrals – for when they got into crisis.”

Thomas kept that same passion for advocacy when he went to college, eventually becoming a Ph.D. in sexology. Using the college system as a tool to shed light on vulnerable people, he fought to normalize LGBTQ perspectives.

“I realized during a meeting with my therapist that I was actually educating him – an actual clinician – on the gay lifestyle, and I knew I had to do more to help people like me.”

“Throughout my life as a teacher, people would come to me unsure about their own tendencies, because nobody was given the chance to be open about themselves. That’s what stigma does. You know, a lot of people think that gender fluidity is a new concept – it’s not. I spent a lot of time with people back in the 1970’s, people who did not feel like their bodies reflected who they were on the inside. This was 40 years ago!”

“Today, I hope we celebrate who we are and what we’ve got.”

Thomas was a Dean for a school in San Francisco up until a decade ago, when an accident impaired his mobility. For a while, he stayed on the west coast with the help of an in-home assistant,  but Thomas knew he wanted to move.

“I really wanted to get back to Chicago, I wanted to be home. The folks at Heartland Housing were ready to go the extra mile for me. They were very welcoming and really wanted to make sure I could move in with little difficulty”

“I love the openness here. You have a community, and you can share exactly what you want. We have potlucks, and we all gather just to be together. You know, in the 1960’s you would never have thought that a place like this could even happen. I’m very lucky to get to live here.”