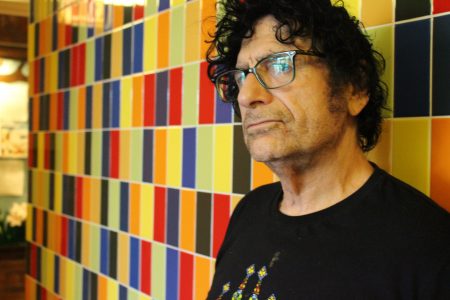 Rick Medici moved to Chicago in 1996, looking for a change of pace after having lost far too many friends in New York City to the AIDS crisis. Almost a decade later, he was one of the first individuals to move into Town Hall Apartments, one of our senior housing properties where many LGBTQ residents find safety and community. Now 73 years old, Rick has lived as a teacher, a dancer, a musician, and an activist.

Rick came out to his family at 14 years old. As a teenager, he moved from his family home to New York City – where he lived most of his life. Even in the most vibrant and diverse metropolis in the world, life as a gay man was still difficult.

“There was always a lot of harassment. From people, from the police. You had to hide who you were and watch who you were around. It was hard to meet people like you without being harassed.”

“Stonewall Tavern was one of the only places that was out in the open, and so it was picked out by the police all of the time. Then, in 1969, the cops came in to raid the place and most of the people were sick and tired of this – especially, the drag queens. They started fighting back, and we followed their lead.”

“People don’t realize that the riots went on for days and it took over blocks all around. There was a lot of anger, and it was time we would be heard. The riots provided a sense of great relief. We decided it was time to be free and to be who we were.”

“You know, the Stonewall Riots was just one revolutionary moment in the 1960’s. That time was all about revolution – from the free love movement, to Martin Luther King Jr..”

On the AIDS Crisis

In the 1980’s and 1990’s, Rick lost many friends. He remembers when he first got sick, and just how draining it was to try various drugs that were meant to keep him alive. Rick considers himself very fortunate to have found the protease inhibitor cocktail that would allow him to be healthy and allow him to work.

“There was a brief period of time where we all truly felt free. There was this decade that came right after Stonewall and just before the AIDS crisis where it seemed like we won the revolution. But when the crisis came, we all had to go back into the closet.”

“It was so scary. You know, it took until the 1990s for people to actually recognize AIDS as a specific disease. People used to just call it ‘gay cancer’ – and it’s hard to live that sort of stigma down. I remember there even being a time where other gay people were afraid of folks living with AIDS, and even at the beginning we had to educate and advocate ourselves to fight stigma. It was a real revelation when society started to address the crisis and address us.”

Rick has been with Heartland Alliance since 2014. His one-bedroom apartment provides space for his piano, and the affordable support services that allow him to live without the fear of instability. Most importantly, staff and residents at Town Hall Apartments give him the welcoming comfort that all homes should provide.

“Moving to Town Hall made my life so much easier. Being able to live in a place where rent was based on my income allows me to shift my concerns to my health, rather than my finances.”

“I love spending time in these public spaces and having community. There’s 79 people who live here – and we come from all walks of life, not just the LGBTQ community. We’re all very supportive of each other here.”