A Life of Service and Passion | Heartland Alliance 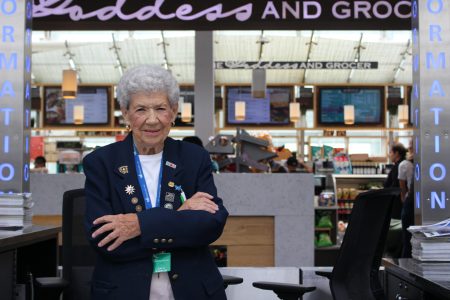 Making it to your destination in one of the busiest airports in the country can be intimidating.The volunteer-based Travelers Aid Chicago – Heartland Alliance’s longest-running program – has been making the airport experience at O’Hare International Airport a breeze for over 64 years.

Since 1971, June Kreplin has been an integral part of that team. Over the decades, June has helped thousands reach their destination. At 96 years old, she still makes it in every Friday morning.

June first heard of Travelers Aid when a friend asked her to help a plane full of newly-adopted Korean children find their parents. June is herself a mother of an adopted child, and immediately responded to the call to action.

“A friend who said they needed help with these young kids, and that continued for some time. Sometimes there were a whole lot of kids being adopted, up to 25 babies on a plane. We changed a lot of diapers back then.”

June has helped infants, toddlers, seniors and teenagers. She’s helped refugees, veterans, individuals with disabilities, and those who were simply alone in a strange country. You have to be quick on your feet in this work, and June’s always been ready to find solutions to myriad issues. She remembers in particular a young German woman who was distressed in the international terminal, without a ticket and repeating a phrase in a language that she couldn’t translate.

Fortunately, another man had been nearby that seemed to share the same language – and June sprung to action.

“I remember jumping in front of him and asking if he spoke German. As soon as he said yes, I grabbed him and said ‘come with me.’”

The two were able to figure out what flight the young lady needed and connect her – all without June being able to even speak with the distressed traveler.

Nowadays, when she encounters a passenger who needs more intensive social services, she has the Travelers Aid Social Service team to call upon. 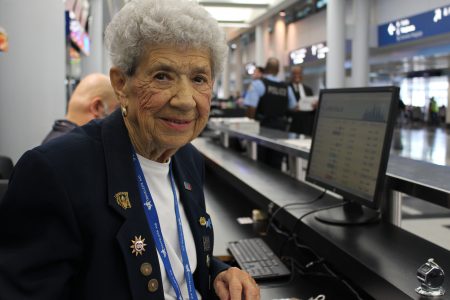 The work of Travelers Aid is often times thankless. When people are confused and in a hurry, folks often forget about the helpful guide in the blue jacket. But for June and the rest of the Travelers Aid team, that’s quite alright.

“People oftentimes don’t know how the whole traveling process can take a long time – especially if this is your first trip through the United States. It can be easy to lose patience, and it can be difficult. I think we are probably the only ones who can help those folks. I think that’s really important work.”

Today, June lives in Rosemont. She loves that her weekly drive to O’Hare only takes a few minutes, so she can spend most of her Friday in the international terminal and not on the road. She considers the airport a second home, and the new people she meets every week are new friends that she makes along the way.

“I guess I’m just a people person. I can help anywhere between fifty and three hundred people in a single day. The variety of the people who come through this place makes it an adventure every day.”

June’s service to Heartland Alliance over the years is priceless. With almost a half-century worth of volunteering, there really is no telling how many people she’s helped from around the globe. June, however, just sees this as her chance to connect with one of the favorite places in her city – and some of her dearest friends.

“I like this work very, very much. O’Hare is a special place, and my relationship with this organization is so very close. I’m very close with all of us still volunteering over the years.”